Is the Capture Industry’s Approach to Security too Lackadaisical? Interview with P3iD’s CEO Kevin Neal 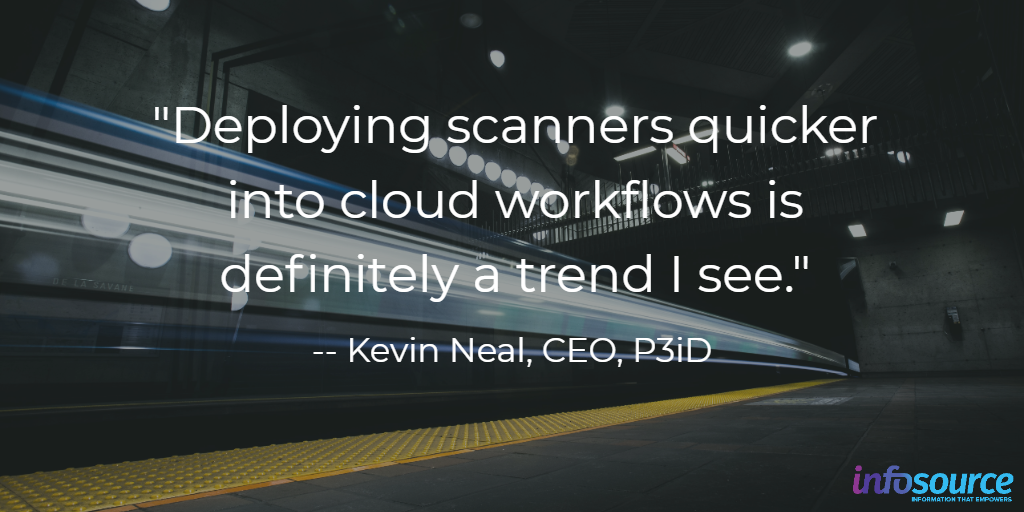 This is the first of three sponsor interviews (look for Foxit with Kai Wille here and TWAIN, also with Kevin Neal in his role as TWAIN Board Member here) that we recorded at Capture Conference 2021.

Duhon: Here with Kevin again in his role as CEO of P3iD – and apologies as I constantly get the name of his company wrong so apologies for that as always.

So asking the question that we asked on the TWAIN side (Kevin Neal also did an interview in his TWAIN role; you can watch that interview on YouTube here); What problems are your customers confronting in the capture space?

Neal: So I always say that capture is like a wonderful technology that’s been around for 30 years. It’s tried and true and been proven delivering value to customers. But it’s always been traditionally on premise. It takes almost a rocket scientist to get the capture software set up and maintain it and takes days to provision scanning systems. So deploying scanners quicker into cloud workflows is definitely a trend I see.

And with the new technologies like TWAIN Direct and the scanner API systems from different manufacturers is definitely a great value to the market because now these platforms allow quick scanner deployment and centralized management of the devices. It allows cloud connectivity to third-party cloud systems. It provides security workflow.

So I definitely see a trend towards network scanning plus cloud services.

Duhon: OK. This is a traditional conference, but you’ve got a bit of equipment here and you’ve got Scanbot and Mobilebot. And I guess that’s what you’re going to be talking to conference attendees about this today and tomorrow.

Neal: Yes. We’re very excited about our two new announcements. So we have Scanbot, which is a centralized scanner control system that’s built with the manufacturer APIs plus TWAIN Direct. It supports any scanner manufacturer out there under the sun. Scanbot is hundred percent Web-based scanning – no local installation of a scanner driver, no installation of capture software. It’s 100% Web-based, so all you have to do is just go to a URL and then pick the scanner that you want to scan and press a button and then it uploads the image from the scanner into the cloud service. Then you can send it to backend systems, capture systems, workflow systems, storage systems

We think that Scanbot is definitely the wave of the future with 100% no software installation whatsoever.

The second announcement is Mobilebot. Mobile capture with the interface being the smartphone devices or the tablets is definitely the future. Again, a lot of these new network scanners; they don’t come with the big touch screens like they used to. They have little tiny screens. So to authenticate/preview the image is really important and you can’t do that on the touch screens. So definitely Scanbot plus Mobilebot; we think that’s the future of capture.

Duhon: Again, the easy question for me to ask; 18 to 24 months from now (I guess a little bit less of a TWAIN emphasis and more of a software CEO emphasis) where do you see the industry going?

Neal: I think that capture for a long time has been a stand-alone process outside of the mainstream business software. I definitely think that in the future capture will be embedded in a line-of-business application. So maybe a scan button inside your QuickBooks or inside your Salesforce

Duhon: OK. Kevin, we spoke two or three weeks ago and one of the themes you mentioned was security, which I hadn’t thought about really in the context of capturing the cloud and all of this. As you’re talking about mobile, especially with mobile devices and scanning information that has personally identifiable information (PII), how crucial is security going forward? And how often is it overlooked – or is it overlooked – especially in our industry?

Neal: Capture has traditionally been behind the firewall and not exposed to cloud services. You can’t have an insecure cloud application. It has to be secure, and it can’t be just a checkbox – so things like enterprise authentication to an active directory and LDAP single sign-on.

Authentication is really important for cloud services. Plus you need to have encryption at rest and encryption in motion. You have to have secure networks concepts like zero trust and perfect forward secrecy. All these things need to be applied to cloud capture. It can’t be overlooked.

I think in our industry we tend to just overlook it and not take it as seriously. What’s going to happen – my prediction – is that these IP-based devices at some point there will be a data breach.

Duhon: I was going to ask do you see that happening?

That’s why at P3iD we have experts around enterprise authentication encryption and we’re applying cybersecurity framework to traditional capture technologies.

Duhon: And of course people should not leave their passwords as “12345.” [In a previous conversation, Kevin had mentioned finding this “password” in the real world.]

Interested in learning more about P3iD? You can get in touch with Kevin via his:

PrevPreviousAre You a Production and Industry Print Expert? We’re Hiring.
NextPDF – The Answer for Document Sharing in a WFH World? Interview with Foxit’s Kai WilleNext