TWAIN Direct Is Web-Enabling and Simplifying Scanning and Capture 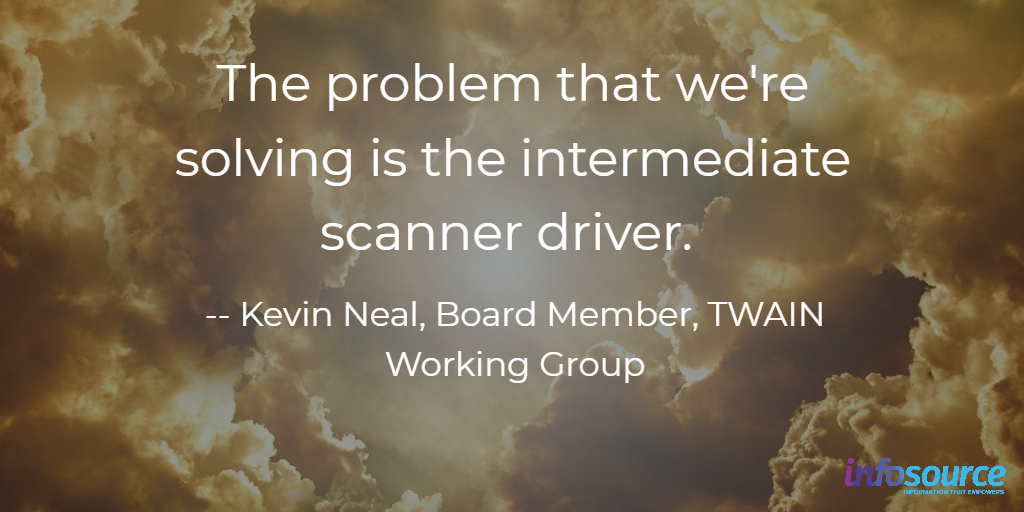 Managing hardware — printers, copiers, and scanners — is a tedious, time consuming task for IT. TWAIN Direct offers help to overworked IT departments to centrally manage their scanners.

We spoke with Kevin Neal, TWAIN Working Group Board Member, about what’s new with TWAIN Direct and how it can simplify device management, along with a few other trends.

This is the third of three sponsor interviews (read/watch P3iD — with Kevin is his CEO role — here and Foxit’s Kai Wille here) that we recorded at Capture Conference 2021.

Duhon: Good to see you, Kevin, and thanks for joining me here today.

Neal: No problem, nice to see you, Bryant.

Duhon: To dive into the first question here, what are some of the problems that your customers are facing in the capture space?

Neal: We’re here at the Capture Conference representing the TWAIN Working Group (TWG) and there’s been a lot of progress with the TWAIN Direct. TWAIN Direct is a scanner-to-application API.

The problem that we’re solving is the intermediate scanner driver. Having a direct application-to-device API eliminates things like Windows 11 updates. You can run in Citrix environments virtual desktops so you can actually deploy scanners quicker and get value to the customers quicker by being able to register a scanner with TWAIN cloud server in just minutes and then get workflow started.

We’ve done a lot of work in the past two years since the last Capture Conference. We’re very pleased to show Web scanning applications and mobile applications integrated with the TWAIN Direct API.

Duhon: One of the things that – I think we’ve briefly talked about this in the past together – but it seems to me one of the biggest values that this brings, especially from an IT support standpoint is just saving these guys a huge amount of time. Do you find that to be a selling point for this?

Neal: Absolutely. You know network scanning in general is a major trend. So all the major manufacturers like Fujitsu and Kodak and Canon all have centralized servers and those are proprietary systems for their scanners only. TWAIN Direct brings another dynamic because it can support all the manufacturers that I mentioned, but you can have a mixed environment of different manufacturers, different model numbers, and exactly like you said the IT administrator can see one view of all the status of their scanning devices on their network in real time so that brings tremendous value to maintaining the devices more effectively. Also managing workflows and users so there’s one centralized pane of glass that you can use to manage your entire capture environment.

Duhon: I think you covered this a little bit in your initial answer but is there anything specific that you’re going to be talking to the conference attendees about tonight and tomorrow?

Duhon: OK, then, of course, the easy question for me to ask: the capture industry is always changing, what do you see that may be different in 24 months? What might be the same?

Neal: I definitely see the use of mobile devices to interact with these types of scanners. You can see a lot of them have small touch screens so authenticating with the username and password is difficult or impossible. Or previewing the images after they’re scanned; you can’t do it on these screens. So everybody has smartphone devices or tablets so I can imagine walking up to a scanner and actually using your mobile device to authenticate and then preview the images.

I definitely see mobile plus something like TWAIN Direct being the future of capture.

Duhon: OK, just a bonus question as it were. Where do you see TWAIN evolving over the next two years?

Neal: Absolutely. As you said, it’s been a busy two years since the last conference. I think that people will see that TWAIN Direct as a strategy is what they want to put in their clouds.

So I think basically democratizing the ability to use any device from any manufacturer or mobile is definitely the future.

Duhon: Thank you very much, Kevin.

Duhon: Even if you are a Pittsburgh Steelers fan.

PrevPreviousPDF – The Answer for Document Sharing in a WFH World? Interview with Foxit’s Kai Wille

Managing hardware — printers, copiers, and scanners — is a tedious, time consuming task for IT. TWAIN Direct offers help to overworked IT departments to...

As the pandemic reworks how and where we work, one thing is clear — being able to simply and easily share digital documents is a...